Soccer Headers May Cause Brain Damage 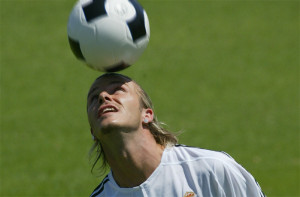 Real Madrid’s superstar English player David Beckham heads the ball during a game at Sport city in Madrid, Spain, in 2003.

A new study of long-time adult soccer players has found changes in the brain similar to traumatic brain injury as a result of repeated “headers” of the ball. The study also found an association between players who had repeatedly headed, and slight memory loss.

“What we are seeing are the effects of lifetime exposure of adults in their late 20s, 30s and early 40s who have been playing since they were kids,” said Michael Lipton, associate director of the Gruss Magnetic Resonance Research Center at the Albert Einstein College of Medicine and medical director of MRI at Montefiore Medical Center in New York City.

“Soccer is more of a contact sport than is appreciated.”

Lipton said the results were not the effects of concussions from hard hits between players or players hitting the ground, rather they were the effects of less powerful but perhaps more frequent contact between the head and the goal. Heading is a common technique in soccer to both score goals and control the direction of the ball.

Lipton surveyed 37 amateur players in a New York city adult soccer league, 29 of them men. The participants were asked about the amount of headers they did over the course of a season, as well as the number over their careers. Most had played an average of 22 years.

The players also had their heads scanned by something called Diffusion Tensor Imaging (DTI), an advanced MRI procedure that is able to look at molecular changes to the brain tissue. DTI produces a measurement, called fractional anisotropy (FA), which characterizes the movement of water molecules along axons.

Lipton’s study, published online Tuesday (June 11) in the journal Radiology, found that the most frequent headers showed abnormalities of white matter similar to what the is found in patients with concussion.

“Soccer players who headed the ball above a threshold of 885 to 1,550 times a year had significantly lower FA in three areas of the temporal-occipital white matter,” Lipton said. While players with more than 1,800 headings per year were more likely to demonstrate poorer memory scores.

One long-time soccer physician said the study was too limited to prove a clear link between heading the ball and brain injuries. Rocco Monto, an orthopedic surgeon on Nantucket Island and a consulting physician to USA Soccer, the sport’s governing body, said a previous study of young German soccer players showed no connection between headers and the kind of brain damage picked up by the DTI scans.

“Maybe this is like getting a callous on your finger from playing the guitar,” Monto said. “Maybe it’s something more serious. It is another bit of data that suggests there are some real long term issues that occur in the brain.”

Monto noted that the study lacked a control population of players who headed the play relatively infrequently, such as goalkeepers. Monto said he used to play in the same league studied by Lipton, and he questioned whether there were as many headers as reported — 1,500 per season when teams only practiced once and played once a week.

“The numbers (of participants) are small and the data are sketchy,” Monto said.

So what’s a soccer mom or dad to do?

“We don’t have enough evidence to make specific proscriptive recommendations,” Lipton said. “For my own kids, I would actually say that I tend to be more conservative and would have them minimize the amount of heading, especially heading drills done in practice.”