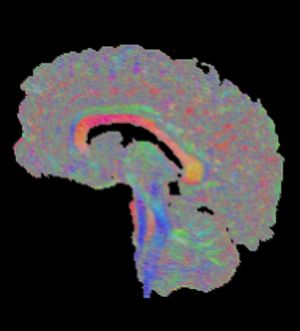 Visualization of DTI data, depicting a sagittal slice of a human brain near the mid-sagittal plane. The visualization uses the standard XYZ-RGB principal eigenvector color mapping. Especially prominent are the corpus callosum (large red structure in the center) and the fiber tracts that descend toward the spine (blue). Black areas are air or cavities that are filled with corticospinal fluid. (Photo credit: Wikipedia)

Specialized MRI brain scans, using a technique referred to as diffusion tensor imaging (DTI), demonstrate evidence of ongoing brain abnormalities nearly four months after a mild brain injury or concussion, even after most symptoms have significantly subsided, based on new researchpublished online, November 20, 2013 in the Journal, Neurology. The study was funded by the National Institutes of Health.

“These results suggest that there are potentially two different modes of recovery for concussion, with the memory, thinking and behavioral symptoms improving more quickly than the physiological injuries in the brain,” said study author Andrew R. Mayer, PhD, of the Mind Research Network and University of New Mexico School of Medicine in Albuquerque.

Mayer further draws an analogy–in simple terms albeit—that recovery and healing after concussions may be akin to recovering from a burn.

“During recovery, reported symptoms like pain are greatly reduced before the body is finished healing, when the tissue scabs. These findings may have important implications about when it is truly safe to resume physical activities that could produce a second concussion, potentially further injuring an already vulnerable brain,” Mayer explained.

Standard imaging with CT or MRI would fail to reveal such subtle, yet important changes in brain physiology and function. “Unfortunately, this can lead to the common misperception that any persistent symptoms are psychological,” said Mayer.

Mayer’s research evaluated 50 people who had suffered a mild concussion (secondary to falls, motor vehicle accidents and assaults) along with 50 healthy people of similar age and education, and compared their cognitive skills including memory, thinking, speed of completion of tasks, as well as any symptoms such as anxiety or depression two weeks after the concussion, along with their specialized MRI scans. Four months after the concussion, 26 of the patients and 26 controls underwent repeat neurologic evaluations and specialized MRI scans.

Based on results of the study, two weeks after the head injury, those participants who suffered concussions had more difficulties with thinking, processing and memory including physical symptoms such as dizziness and headaches, along with depression and anxiety compared with those participants who had not suffered a concussion. However, four months after the injury, their symptoms were reduced by up to 27 percent.

In the study, based on the diffusion tensor imaging scans, those participants who had concussions also had evidence of abnormalities in the gray matter in the frontal cortex area of both sides of the brain. There was nearly a 10 percent increase compared to those who had not suffered a concussion in the study, and these noted abnormalities were still observed four months after the concussion. Meanwhile, there were no findings of cellular loss between the two groups seen on the MRI scans.

Mayer explained that the brain abnormalities could be related to cytotoxic edema, which results from water accumulating in and around brain cells, or reactive gliosis, which is due to an alteration in the shape of certain nerve cells called glial cells as a result of a blunt impact in the central nervous system. However, these possible mechanisms–which are based on animal studies–represent theoretical explanations only, without having actual brain tissue to confirm these suspicions.

Limitations to the study include the large number of patients in the original cohort lost to follow-up, as well as lack of stratification by patient injury type, and the potential for imaging artifacts that may have created errors in interpretation of brain scans.

While this study involved the general population at large, the take-away and potentially broader implication from this research is that all athletes–but especially younger ones–who suffer a concussion and currently sit out from play only one to two weeks may require a significantly longer period of time for full recovery and healing.

Typically, in one or two weeks, the majority of athletes often feel better and seem to function better physically, cognitively and emotionally. In the scheme of things, however, if we are comparing a concussion to a burn injury–as Dr. Mayer does in this study– one must consider a much longer-term healing process, so delaying a return to competition would reflect more rational clinical judgment.

The current research serves to underscore the important recognition that physical, structural and biochemical changes within the brain after concussion are distinct from the cognitive and emotional symptoms. Unfortunately, whether the structural changes noted on the DTI scans are predictive for long-term concussive effects such as Alzheimer’s dementia, chronic traumatic encephalopathy (CTE), or ongoing depression are unknown at this time.

The bottom line is that medical personnel caring for athletes should routinely re-evaluate athletes at longer term pre-determined intervals. It is unclear what the intervals truly are, so more research is clearly needed.

Based only on short follow-up data such as seen in this study, being able to estimate or foresee long-term effects is quite difficult and challenging. We must commit adequate research funds to study the long-term effects of such injuries, seen only in the short term.